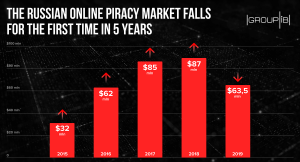 In November, Group-IB, a provider of anti-piracy professional services and technologies based in Singapore, announced that online piracy in Russia had declined for the first time in five years. As of November 2019, the revenue generated by online piracy was reported to be about $64M, which is down from 2018 by 27%.

Group-IB attributed this decline to three factors. One is the shut-down of a CDN called Moonwalk, which supplied two other major CDNs that pirates use to distribute stolen video content. Together, these three CDNs provided content to 90% of pirate streaming Web sites across Russia and the Commonwealth of Independent States.

The second factor was the reduction of advertising, including ads from illegal online casinos and bookmakers.

A third factor was new Russian legislation, and an anti-piracy memorandum that was co-signed by several large Russian Internet and media companies in 2018. A directive was put in place that required search engines to remove links to pages with pirated content, resulting in the removal of about 600,000 links.

While there is the belief that Russia has had a questionable reputation concerning content piracy, the reality of the situation is much different. Just as in other regions of the world, rights holders, transporters of video content, and legislators are banding together to attack the video piracy problem.

In fact, a 27% decrease in video piracy over the course of a single year is an enormous accomplishment.