The Alliance for Creativity and Media (ACE) reported a number of pirate take-downs during April 2022, for sites operated in North Africa, Singapore and Peru.

The domains associated with these piracy sites were transferred to ACE and now re-direct to the Watch Legally section of the ACE Web site.

These sites had combined traffic reaching more than 31 million monthly visits, mainly from French-speaking countries. Upon being approached by ACE, they closed their services.  At the time of this announcement, ACE was continuing negotiations toward settlements with the operators.

Operating from Morocco, Tirexo was the second most visited infringing service in France and the number one illegal streaming service in France. In March 2022, Tirexo attracted 18.87 million visits, with access to 131,000 movie titles and 34,000 TV series episodes.

Operating from Tunisia, Zone-Telechargement was the third most visited infringing service in France and was a downloading, linking, and streaming website. In March 2022, it attracted 11.36 million visits, offering access to 46,000 movie titles and 11,500 TV series episodes.

Singapore-based afdah.video was recommended for inclusion in the European Commission’s ‘Counterfeit and Piracy Watch List’.  According to the March 8th filing by the Motion Picture Association, “This pirate streaming site has been active since 2020 and is highly popular in the U.S., though the operator is based in Singapore. Afdah.info (which went offline but redirects to afdah.video) had over 7 million visits in August 2021 from nearly 1.5 million unique visitors according to SimilarWeb. 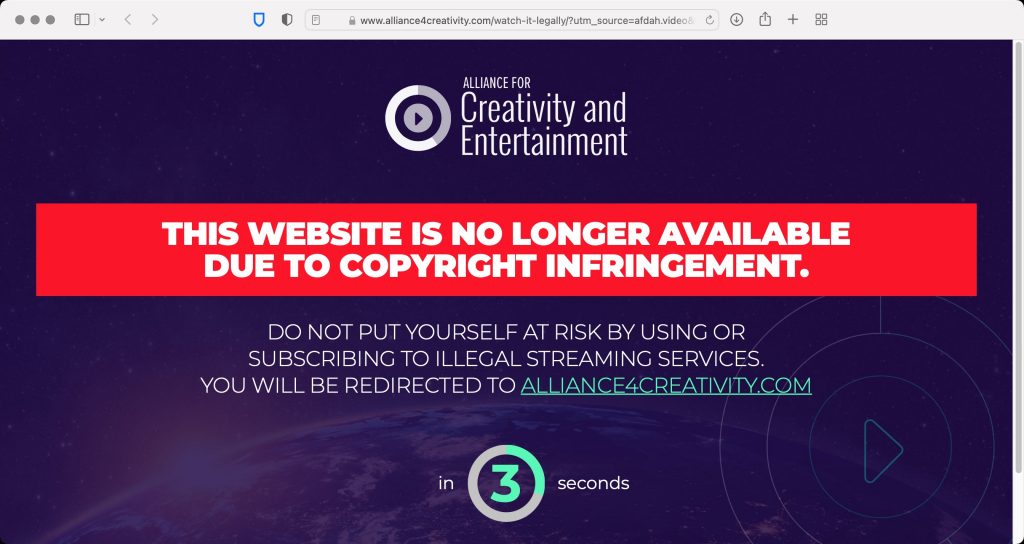 “(Afdah) feature(d) movies, including content from MPA members, that can be searched easily with a filter and search engine. The site first started operating at afdah.com in 2013 and later at afdah.tv and afdah.to which were blocked in Singapore in 2018. Afdah.info was blocked in Singapore in February 2021 pursuant to a dynamic injunction covering variant domains over time,” according to the MPA’s filing with the European Commission.

According to ACE’s April 2022 press release, “Afdah.video had over 80,000 full length movies  stored on three video hosting platforms and at its peak had in excess of 30 million visits per annum. Domains associated with the site were also subject to judicial site blocking orders in Singapore, Australia and the United Kingdom.”

Peru-based piracy operation Pelisplushd.net was one of the largest illegal providers of on-demand audiovisual content in the world, according to ACE.

The site was ranked as the second largest rogue Spanish-language website in the entire Latin American Region. The site had 383.5 million visits in the past six months and averaged 68 million visits per month during the last six months with nearly 75 million visits in February 2022 alone. With 1.5 million of these visits originating from the United States, it was the 15th most popular streaming site in North America last year. The site was also particularly popular in Mexico, where it was the 54thmost popular site in March 2022 with higher numbers of visits than hbomax.com, disneyplus.com and primevideo.com.

“The successful action against the operator of Pelisplushd.net was only made possible because of evidence that we gathered from previous operations conducted in other countries in Latin America,” said Jan van Voorn, Executive Vice President and Chief of Global Content Protection for the Motion Picture Association.

These take-downs are part of ACE’s “ongoing efforts to reduce piracy in the Asia Pacific region and throughout the global creative ecosystem,” said Jan van Voorn, Executive Vice President and Chief of Global Content Protection for the Motion Picture Association. ‘Streaming piracy websites and IPTV piracy services put consumers at risk of egregious malware, undermine investment, reduce tax contributions to governments, and stifle creativity. We will continue to identify and interdict the operators of such online piracy services’.”