Operation 404, a multi-national collaboration between law enforcement agencies, judicial systems and industry organizations including ACE and IFPI, began in 2019.  Phase 4 was launched on June 21, coordinated by the Ministry of Justice and Public Security.

According to Brazil’s Ministry of Justice, Phase 4 had taken 461 illegal apps offline as of June 21, which had been responsible for more than 10 million downloads and a revenue loss of 366 million Brazilian Reals per year.  Three quarters of these apps reportedly captured consumer personal and financial data as well.

Operation 404 has announced major accomplishments each year since 2019.  Phase 1 siezed 136 Web sites and involved agencies from the US, France and Canada in 2019.  Phase 2 took down more than 250 video sites and 65 illegal streaming apps in 2020. In 2021, Phase 3 took hundreds of further sites out of service, including one that was getting 17 million hits per month.

In reporting to date, more than thirty search-and-seizure raids resulted in the takedown of at least 226 Web sites and at least six arrests in São Paulo, Goiás and Minas Gerais states.  In total, the effort involved police in 11 Brazilian states.

Globo reported that in Belém, a suspect operating an ad-supported streaming service with movies and series TV programming was not arrested because the server was not operating at the time.

Globo also reported that in Pernambuco, 366 apps were removed from the Google Play Store, 11 streaming apps hosted by Huawei’s APPGallery platform, a Web site that distributed games, 89 infringing YouTube channels and 134 infringing Web sites. A police representative there said that the penalty for piracy distribution is two to four years’ imprisonment, and “six months to a year in prison for those who consume pirated content.”

According to the US Department of Justice, the United States obtained court authorization to seize the domain names of six of these sites, pending forfeiture. Four of those domains – “Corourbanos.com,” “Corourbano.com,” “Pautamp3.com,” and “SIMP3.com” – were registered with a U.S.-based registry, while two domains – “flowactivo.co” and “Mp3Teca.ws” – were registered through a U.S.-based domain registrar. 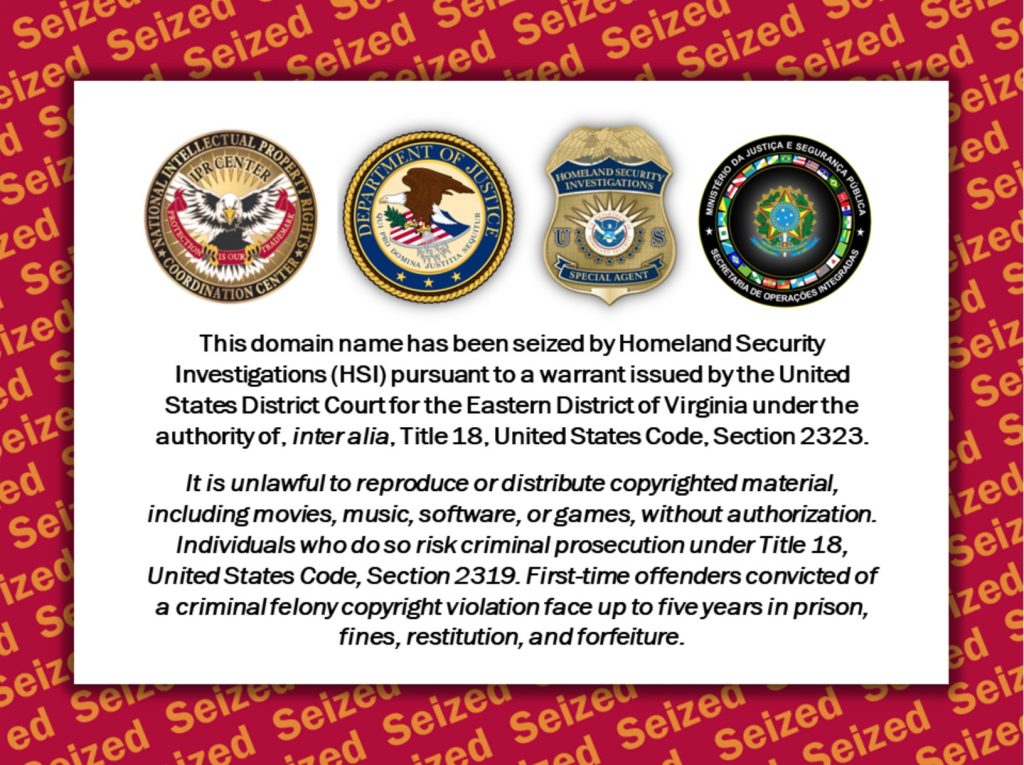 ACE Successfully teamed with Brazilian, US and British authorities and deployed the fourth wave of “Operation 404″in Brazil.  ACE, June 24

Announcement by the Government of Brazil

Operation 404 is a large-scale operation involving a wide variety of government and law enforcement agencies.  According to the Deputy Secretary of Operations for the Brazilian Ministry of Justice and PUblic Security (Seopi/MJSP), copyright infringement has resulted in nearly US$3 billion lost annually in Brazil (15B Brazilian reals).

The US DOJ said that Operation 404.4 was the result of collaborative efforts between the U.S. Attorney’s Office for the Eastern District of Virginia; the Government of Brazil Ministry of Justice and Public Security Cyber Laboratory; numerous Brazilian State police forces and the US Department of Homeland Security (HSI) Washington, D.C.