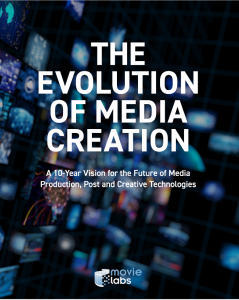 In 2019, Motion Picture Laboratories, Inc. (MovieLabs), the research and development joint venture founded by the major Hollywood studios, published a paper called “The Evolution of Media Creation,” proposing 10-year vision for the adoption of new technologies to aid in content production, post and visual effects, in a secure and distributed environment.  The paper formed the conceptual foundation for an initiative called Vision 2030, and the studios are working actively to create a cloud-based media pipeline with software-defined workflows and zero-trust principles.

Each of them recounted internal initiatives to move their content to the cloud, using commercial cloud providers including AWS and Microsoft Azure.  Sony Pictures Entertainment is three years onto a project that is migrating an internal system that’s made it easier for VFX vendors to find assets into a new framework for Vision 2030.

Marvel Studios is ten years into uploading raw camera content into a cloud repository which recently marked its 100 millionth frame in storage. It has also created a Marvel Cinematic Universe archive with VFX, plates, and a variety of other content, and is creating a master cloud for publishing.

Warner Bros. Discovery has established a Studio of the Future with a backoffice that makes it easier to monetize Warner Bros. Discovery assets as the studio brings its supply chains together.  “As we focus on our production pipeline, how do we create an environment that DC Studios, the Animation department, the VFX department and aross many verticals,” said Renard Jenkins, SVP Production Integration and Creative Technology Services for Warner Bros. Discovery.  “How do we create a common environment that finds assets so they can reuse and repurpose existing content?” he asked.

What are their biggest priorities?

As Anthony Guarino, EVP of Global Production and Studio Technology for Paramount, put it, “We are making great progress on a foundation that works.  We are moving editorial to the cloud now, with 300 editors working remotely.  Editors have embraced it, and find it valuable.”  Next, Paramount will build an orchestration layer.  “We have content, we have apps that we use in common.  We know we need a platform as a service.”

Marvel’s Head of Technology, Eddie Drake, added “We need to rise above the vendors.  This platform needs to be at the application layer.  We’re in a multi-cloud world.”  When asked whether “moving assets to the cloud” means “moving services to the Internet,” Drake said that Disney is moving services where people can get to them.  “Our security model and user models are being defined now,” he said.

Our two biggest security-related challenges are user authencation and a common federated ID to access data from different places, with more granular authentication,” said Bill Baggelaar, EVP and CTO, Sony Pictures Entertainment.  “Security by design is key and we have a window of opportunity.  If we can build validation, user authentication and security up front, we won’t have to remediate later.”

“We still have a lit to figure out,” said Warner Bros. Discovery’s Jenkins. “There’s no way that one person will figure it out.  “If we do it right, we unlock a lot of value, create an ecosystem for vendors, and the platform to re-purpose and re-use our assets,” said Eddie Drake.

Read the 2019 Movielabs White Paper “The Evolution of Media Creation”

Read a further summary of this IBC session, “MovieLabs 2030 Vision Update: Studio Perspective,” and access the video of the session

As the executives described their workflow platforms, it became clear that these are vehicles that will help studios not only manage their assets, but also, help the businesses behind these assets.

Or as Warner Bros. Discovery’s Renard Jenkins put it: “How do we re-skin that character’s model – if only I can find it?”  And from there, use it as common repository for theatrical productions, animated versions, games, TV versions, and have a common look and feel by leveraging the same assets.

Now, imagine the impact on the studios if the Vision 2030 framework was breached.  Now we can see the impact of security, and why it can’t be an afterthought.