According to Mediavision’s latest analysis of the Nordic TV and streaming market, as many as three million video-on-demand  subscriptions (SVOD) are currently accessed by users from other households.   Mediavision is a Sweden-based market research company.

Looking at all subscriptions for the 15 largest SVOD services, close to 20 percent are shared with a non-paying household. Netflix has the highest share of borrowed subscriptions, with close to a million Nordic households stating they have access without paying. This is shown in Mediavision’s latest analysis of the Nordic TV and streaming market.

Mediavision asked households that currently borrow subscriptions, how they would act if sharing was no longer possible. Just over half of those surveyed said that they would instead no longer use the service. 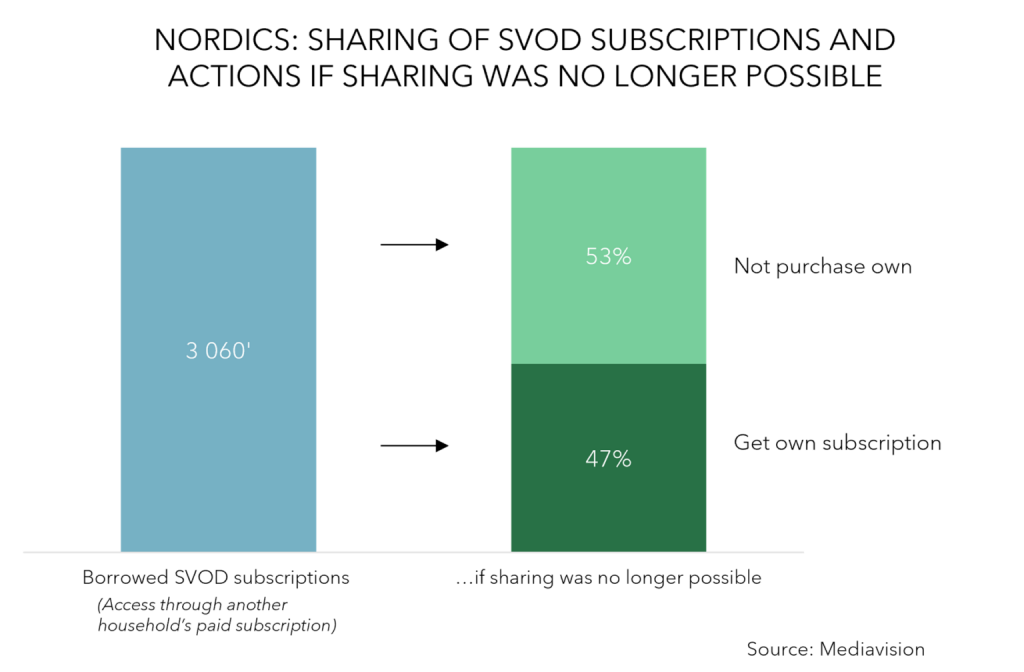 Also, many of those that borrow subscriptions do pay – but for other services. This led Mediavision to suggest that these users could be receptive to alternative services that are less expensive, and also, to ad-financed services (AVOD).

In December 2022, Mediavision announced findings that the number of digital media subscriptions per household had reached record levels during the fall of 2022, although much of that was driven by increased penetration of audio subscriptions, in particular audiobooks and podcasts.

Today, a Nordic household holds on average 2.6 digital media subscriptions, which is a new record. This number is close to 20 percent higher than a year ago, as all media categories have grown.

Read the original article: Three Million SVOD subscriptions in the Nordics are borrowed from another household.  January 12 2023. Mediavision

There’s good reason for concern, as it means lost revenue for the video providers.

“It is a challenge for SVOD actors that so many subscriptions are shared,” said Marie Nilsson, CEO at Mediavision. “But perhaps cheaper, partly ad-financed, services can become a solution and a way to reduce sharing. There are many indications that 2023 will be the year of wider subscription options being established. For growth it is important to have more paid subscriptions,” she said.