The Alliance for Creativity and Entertainment (ACE) announced that it had ended two separate illegal streaming operations operating more than twenty domains in Latin America.

The next day, ACE announced a collaboration with law enforcement in Singapore to seize illegal devices and arrest more than a dozen people.

YMovies was ranked among the top 25 US illicit streaming services, averaging 2.5 million visits per month.  ACE investigative teams in the US and Latin America identified a male Colombian national who connected ACE with the operators of the illegal service.  This resulted in the shut-down of four streaming services.  Combined, the two largest of the four averaged nearly 10 million monthly visits. Visitors to the YMovies.to domain are now forwarded to the ACE ‘Watch Legally’ landing Web page.  The other three were in process of being transferred when ACE announced this shut-down on October 6.

A second Latin America piracy operation, HDFoxCDN was a “Piracy-as-a-Service” operation that created destinations for individuals wishing to operate piracy sites of their own. 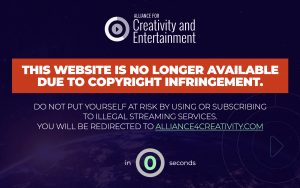 ACE estimated HDFoxCDN to have hosted a library of more than 20,000 film and TV program titles.  ACE’s investigators found their way to a 26-year-old Brazilian man that operated 19 streaming domains, which attracted a total of nearly 2 million visits per month.  That individual agreed to cooperate, took down all of the suspected domains and transferred them to ACE.

The Intellectual Property Rights Branch of the Singapore Police, with ACE support, seized more than 2,500 illicit streaming devices (ISDs) designed to deliver infringing streams of movies and TV shows to consumers.  Police also arrested 17 individuals in central Singapore’s Sim Lim Square.  The ACE announcement did not specify the roles or involvement of those arrested.  The street value of the ISDs was estimated to be about US$350,000 (SG$500,000).

Over the past year, ACE has extended its anti-piracy operations into a global operation and significantly expanded its membership rolls to include TV networks, pay TV operators and online video distributors.  It currently has more than 40 members.  It also partners with Europol, Interpol, the European Commission, the US Department of Justice, the Office of the US Trade Representative, and the IPR Center.

This expansion has enabled ACE to recognize and thwart piracy operations around the world.

ACE was initially established by the major Hollywood movie studios and the Motion Picture Association out of recognition that piracy had been a sustaining and ongoing threat to that industry.