As Netflix rolls out new programs to monetize password sharing, a study by Horowitz Research also suggested that doing so would not be the end of the world.  Horowitz found that “7 out of 10 Netflix users who password share would be willing to pay full price for the service if they could no longer share access.”

Given the crowded and fragmented SVOD market, users are increasingly sharing to offset costs; and that 1 in 3 Netflix users and 1 in 4 Amazon Prime Video users sharing access to those services. The numbers are similar among users of other popular services such as Hulu, Disney+, and Paramount+.

In 2022, Horowitz found that the average streamer uses 7.1 streaming services in a typical month—4.3 of which are subscription services – paying $75.8 a month on average.  This is up dramatically from the $49.3 reported in 2021.

Notably, the study shows that the lower the penetration of the service, the more likely it is that users are sharing passwords. For example, 11% of consumers surveyed have Showtime Now, and a full 60% of Showtime Now subscribers share their passwords, as do 51% of Britbox and 47% of Starz users.

The more valuable the service is perceived to be, the less likely it is that consumers will share their passwords. For example, 83% of Netflix users and 81% of Amazon Prime Video users think the respective services offer excellent value for the money, compared to 63% of Showtime Now users and 60% of Britbox users who feel that way about those services. 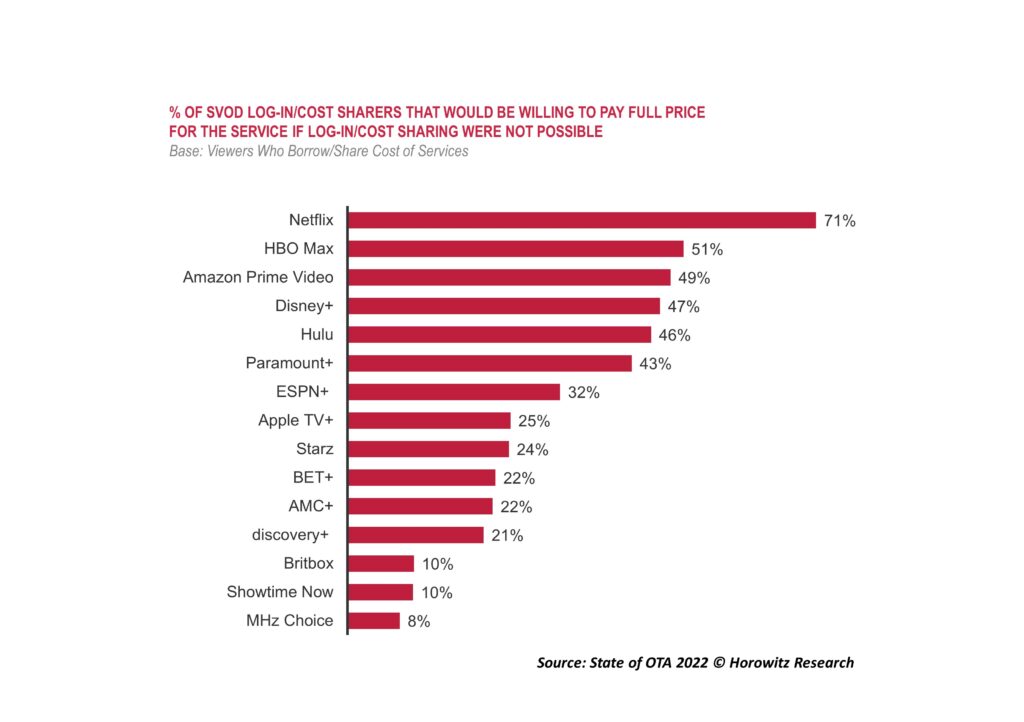 “Netflix and Amazon Prime Video have long proven their value for the money to their subscribers, Netflix because of its extensive library of both syndicated and original content, and APV with its tie-in to other Amazon Prime benefits. As such, while Netflix’s crackdown on password sharing will likely lead to subscriber loss, the majority of subscribers will stay with the service. However, Netflix will need to keep its perceived value high in order for consumers to continue to justify the investment,”

As Netflix said in a prepared statement, “While our terms of use limit use of Netflix to a household, we recognize this is a change for members who share their account more broadly. As we roll out paid sharing, members in many countries will also have the option to pay extra if they want to share Netflix with people they don’t live with.”

“This will certainly be a challenge for Netflix moving forward as their programming costs continue to increase and as they add commercials,” said Ms. Watersto. “Also, other services considering a similar crackdown will need to justify this move by finding ways to add value to their services, making them stickier for consumers.”