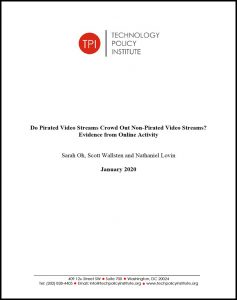 A study released in February 2020 by the Technology Policy Institute found that “every minute spent downloading or streaming pirated video crowds out about 3.5 minutes of non-pirated streaming video.

“Taking into account different compression rates and delivery via file download or streaming, we conclude that time spent watching pirated video displaces nearly the same amount of time that would have been spent watching non-pirated video.”

The report’s conclusions were derived from two sets of measurements.  Consumption of legitimate video services was estimated by evaluating ComScore data across about 20,000 US households and nearly 470,000 consumer devices, between September 2016 and November 2017.

Technology Policy Institute is an organization founded by a “who’s who” of companies with vested interests in digital media, including Apple, Amazon, Charter, Deutsche Telekom, Google, the Motion Picture Association, RIAA, Verizon and numerous others.